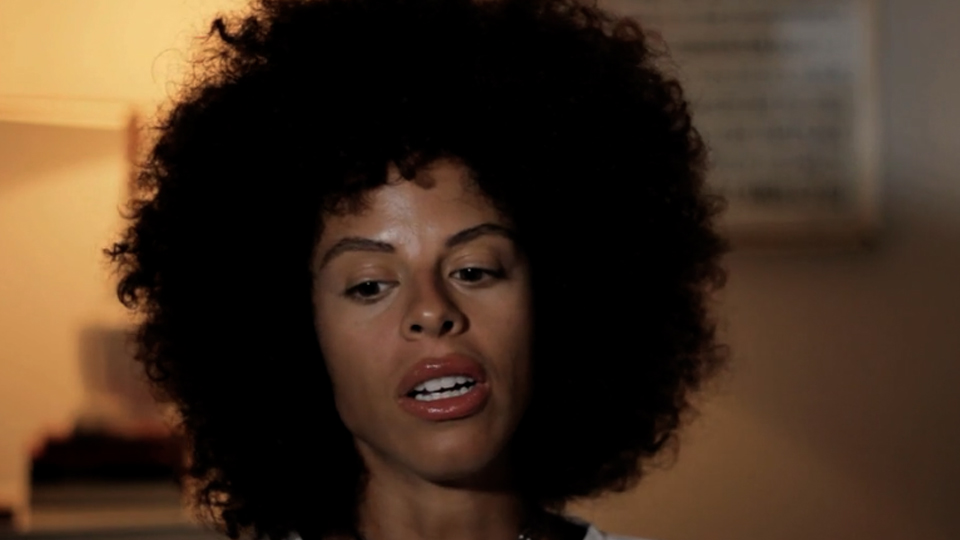 Johanna: I always felt different growing up, I was mixed and there were no mixed people where I lived.

Interviewer: When you say mixed, what do you mean?

Johanna: My dad's black, my mom's white. So growing up in a small Polish town in Jersey, I stood out because of my light skin and big hair. People would judge, like why do you look like that?

I don't know why I was trying to fit in with different people, whether it was the white kids, the black kids, the Latin kids, the smart kids, the kids that did drugs or the artsy kids. I was always able to bounce around.

I was trying to fit in, and kind of overdoing it. I was really smart and I say that because I would be asked to be in talented and gifted classes. I would win writing Awards in school, I was always really bad at math but I was really good at writing, communicating and speaking. Unfortunately, I just couldn't show up to class. Whenever they would call my parents it was either, we think she's tired or we think she's drunk. That wasn't just me being insubordinate or just being a kid.

Later, I moved to New York and of course, I'm in Manhattan, I'm 17 and hanging out with everyone. Getting involved with modeling and the scene. It was actually through modeling that I started using cocaine. They told me “you're fat, so we need you to do some drugs and get skinny” and I was like okay, sounds good. I started to use cocaine, I remember the first time I did it I didn't really know what I was feeling. I remember I bought a whole 8-ball and said to myself “this is going to last me like a week”.

Interviewer: So, an 8-ball of what?

Johanna: Cocaine, I remember I had bought it from a friend. If you know about cocaine an 8-ball is a significant amount and I figured it would last me like a week. 2 hours later, I'm on LimeWire downloading music and the entire 8-ball was gone. I just knew I said to myself, “Okay, so now you need to set some money aside to buy this stuff and have these people get it for you”. I would hang out with people that used cocaine, so I accepted it. I didn't know what was wrong with me, I had no idea that drugs and alcohol were the reason why I was acting like a psycho. I thought I was crazy or I just wasn't wired right, which isn't too far from the truth. I couldn't make the correlation between drugs and alcohol and all the bad stuff happening to me. I hung out with a lot of people who abused drugs and alcohol, and a lot of great things would happen to them. At the least, on the outside, they were pretty, smart and they had money. They dressed well and got into all the fancy parties, so I thought drugs and alcohol couldn’t be the issue, it was working for them. It was really hard for me to distinguish the fact that the substances that I was putting in my body were creating the problems in my life. I wanted to know how to get to that place where I didn’t want to self-destruct anymore.

Whether you struggle with drugs, alcohol, gambling, food or sex. If you put your vice's down, you're left with only yourself. If you don't know who you are, how do you learn to deal with that?

Interviewer: So that’s what you are doing now, learning?

Johanna: Yeah, I’m just learning. Some days, I'm the one that's helpful and others I'm the one that needs to be helped. Just know that there are people out there that are just like you. Young and old, gay or straight, black or white. You'll find the people and help that you're supposed to find if you look for it.

If you build a life around you that you don't want to lose, the chances of you losing it are slimmer because you know what you have, you have something to lose. I didn't really have anything to lose 6 years ago. So whether I drank or did drugs, it didn't matter because I didn’t really have anything to hold on to. Now I have this amazing life and all the things that I have, but I still acknowledge that I could drink or use again tomorrow.

Interviewer: How does it feel to have a second chance?

Johanna: it's weird because I don't think I deserve it. Why am I sober while other people go in and out of treatment programs. I’m not saying that I don't need it, but I've done some pretty fucked up shit while sober. Why do I get the chance to stay sober? I don't know.