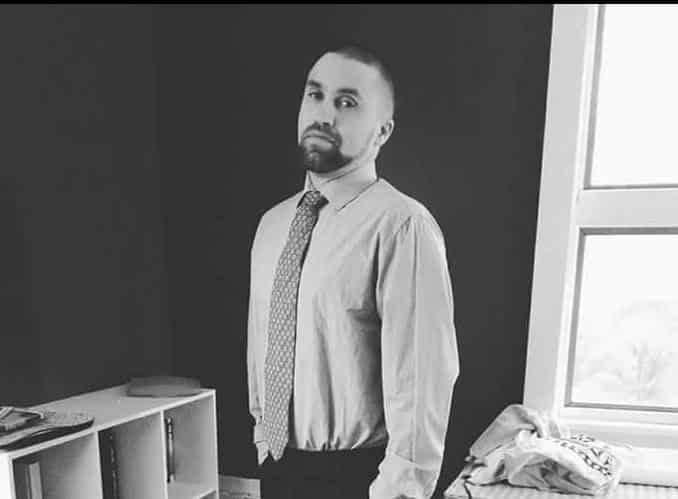 McErlean, like so many on the East End, grew up in Sag Harbor, attending Pierson Middle-High School and going to parties with his friends — before he became ensnared in the grip of a cocaine addiction that almost cost him his life and dreams.

The first time he drank, he said, he was 14 years old. “I was at a party and figured, ‘Why not?’ All my friends were drinking and I wanted to fit in.”

He obtained an amateur boxing license, competing in a Golden Gloves competition, and stopped using drugs until a “freak accident” in the ring led to a broken hand when he was 17.

“I was in a depression about it, and that’s when the drinking started more heavily during the week, on school nights, lying to my parents about where I was,” McErlean said.

Along with the drinking, he began smoking marijuana again and experimented with mushrooms, acid and ecstasy.

After an arrest for drug possession, his grades suffered and he was “not invited back” after sophomore year.

Back on the East End, McErlean said he tried to pick up the pieces, attending Suffolk County Community College, “but the partying just took over. I remember my 21st birthday. I was driving to and from school that night, wasted. I could have killed somebody.”

Cocaine, he said, took over his life. “I even stopped smoking pot in lieu of doing the coke because my cocaine habit had become so expensive; all my money went to that.”

His parents, McErlean said, loved him unconditionally, through the dark days of his addiction, although they weren’t aware of his cocaine use at first. “They always had my back,” he said. “They had nothing to do with why I reached out to drugs or alcohol.”

Looking back, McErlean says his survival is nothing short of miraculous. “There were so many times I could have overdosed,” he said.

His first attempt at sobriety came at 22 and lasted “all of four months,” he said.

His painful journey includes a suicide attempt, McErlean said. “I was so depressed. Drugs had taken over my life.”

The pain of a breakup with a girlfriend, he said, contributed to the despair.

Recalling that dark day, he said, “I had gotten high on coke, then the coke ran out. I was just so depressed and so angry at myself, at the position I’d put myself in from years of abusing my body. I had a bottle of pills and I took the whole thing.”

McErlean took 75 Vicodin pills, he said. When asked about how he’d survived, he said, “I call it God.” He learned that even while in a blackout, he’d called 911 himself.

“WHEN I WOKE UP IN THE HOSPITAL, IT WASN’T MY DRINKING BUDDIES AROUND ME. IT WAS EVERYONE I’D HURT.”

And then, there was a turning point.

“When I woke up in the hospital, it wasn’t my drug buddies or drinking buddies around me. It was everyone I’d hurt, by doing drugs. My dad, my stepmother, my uncle, my brothers. They were all there, with tears coming from their eyes, telling me how much they loved me, even after all that. It was beautiful, and also, very sad. That’s why I take this so seriously now.”

He added, “This is life and death. There’s no sugar coating on it. Drug addiction and alcoholism is an everyday, life and death struggle.”

After that moment of truth, McErlean said he ended up in the sober house where he’d been 10 months before.

And that’s when, he said, Farrell came in.

They were in contact after “God came into play,” he said. He said he wanted to go to rehab off Long Island, and found a facility in Florida, where he was told he could have a bed if he could find a flight. He hadn’t even told his parents yet, McErlean said.

“For the first time in 40 days, I hit my knees,” he said. “I didn’t pray to come to Florida. I prayed for whatever God saw fit for me to do. The next morning, I got a call from Tracey, who told me she’d started a foundation, ‘On Kevin’s Wings’ in memory of her son, who she lost to an overdose. I was crying at this point. She said, ‘I heard you want to go to Florida.'”

Four days later, he was on a plane, and four months later, today, he is celebrating a life of sobriety.

“I had been trying to get sober since I was 22, six years ago, but never hitting bottom. That’s crucial, you have to hit bottom, where you want to be different, cut out the nonsense,” McErlean said.

In Florida, he found a sober house of men from New York that he finds as close as brothers; he found a sponsor who has inspired. “I have a job, I can pay my rent, I have food in my belly. I’m grateful for the little things,” McErlean said. “I’m truly happy again. I’m busting through the barriers of my life, barriers that held me back even before the drinking and drugging.”

He’s even begun boxing again and will compete in June.

“I’m finding out who Nick really is, and I’m at peace with who that person is. I’m not only accepting who I am, but thoroughly enjoying who I am.”

Every day, he said, “I do something to feed my recovery, because I could wake up tomorrow and still drink. I don’t want to, and it’s not going to happen. But you have to do something every day”, so he won’t slip, he said.

He added, “Someone asked me last week, everyone knows about Baby Boomers, what we’d call our generation. I said, ‘Sadly, it’s Generation Rx.”

But now, McErlean said, “I can pick a future where I’m happy and whole, beyond my wildest dreams, without drinking or drugging. I owe my life to Tracey. I love that woman with all my heart. And we’ve never even met.”

Prescription drug abuse, according to the CDC accounts for one death every 19 minutes in the United States.

In addition, the CDC said, opioids, especially prescription pain relievers and heroin, are the main drugs associated with overdose deaths. In 2014, opioids were involved in 28,647 deaths, or 61 percent of all drug overdose deaths; the rate of opioid overdoses has tripled since 2000, the CDC noted.

Two trends are pointed out by the CDC: A 15-year increase in overdose deaths involving prescription opioid pain relievers and a recent surge in illicit opioid overdose deaths, driven largely by heroin.

Natural and semisynthetic opioids, which include the most commonly prescribed opioid pain relievers, oxycodone and hydrocodone, continue to be involved in more overdose deaths than any other opioid type, the CDC said. In addition, “drug overdose deaths involving heroin continued to climb sharply, with heroin overdoses more than tripling in four years.”

And the disease has hit close to home: Suffolk County was named the leader in New York State in heroin overdoses last year.

“The upward trend in heroin-related overdose fatalities among younger New Yorkers is particularly alarming,” the report states. “Half the people who died were under age 35.”

Jeffrey Reynolds, president and chief executive officer of the Family and Children’s Association in Mineola, said the crisis shows no signs of abating.

New synthetics such as carfentanil, may not have reached Long Island yet, but the drug, so strong it’s used as elephant tranquilizer, is creeping insidiously across the country, claiming lives.

“Carfentanil has not yet appeared here; we’ll know when it arrives because we will immediately see more fatalities. I say ‘yet’ because 15 years ago we warned about the burgeoning prescription pill crisis and it happened. Ten years ago we warned of the impending heroin crisis and it happened. Four years ago, we warned about the emergence of fentanyl after it appeared in several other regions; low and behold, that drug is now killing more Long Islanders than heroin,” Reynolds said.

“Drugs travel very rapidly across the United States and change hands hundreds of times before they get to the end user. It seems like we are just chasing the drug du jour and not getting to the roots of substance use or taking enough steps to make treatment available. We are still swatting at the symptoms. We need good prevention that addresses mental health issues earlier on, that gives kids straight facts and that educates their parents.”

To this day, Reynolds said, “There are barriers to treatment including insurance company discrimination and a lack of treatment options. There aren’t nearly enough supports for people in early recovery, but then we blame them for a relapse rate that approaches 75 percent. We are watching the problem worsen and the death toll climb, but we haven’t taken the bold or sustained action necessary to turn the tide. That’s why, unless we do something differently, 2017 promises to be a whole lot worse.”

ONE LIFE AT A TIME

But Farrell perseveres, saving one life at a time, putting one person on a plane at a time, soaring toward hope — in honor of her son Kevin.

The pain, however, lives on, the ache of what ifs and tomorrows not seen.

“Doing this gives me something to focus on,” she said. “It’s a way to honor him, to make something good come out of it.”

If she could talk to her son again, Farrell said she would apologize, “for not understanding as much as I now do. We ask our kids to do all the work to go into recovery, but we don’t do the work ourselves — and we need to, because we’re actually going into recovery, also. With addiction, you have co-dependency, enabling behavior. You need to do the work, as well, because you are both trying to heal.”

She added, “It’s a family disease.”

And recovery, too, means holding hands and hearts and facing the future together. “This foundation isn’t a ‘me’ foundation, it’s a ‘we’ foundation,” Farrell said.

By Lisa Finn via Patch