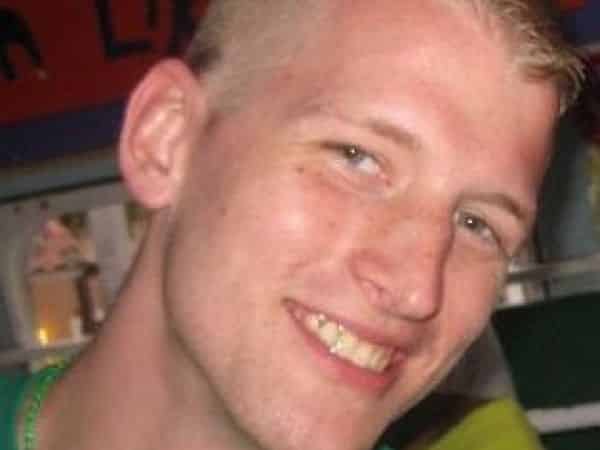 This year will mark five years since Rocky Point mom Tracey Farrell last saw her beloved son alive. Five years since she’s heard him laugh, seen his smile, gotten to share dinner and stories and make plans for a bright future he was never to experience.

Her son Kevin Norris died of a heroin overdose when he was just 26 years old.

But in the years since, Farrell (she was married recently; her name was previously Budd) has taken the worst moment of a mother’s life and chosen a path to help others struggling with addiction, starting a not-for-profit in her son’s name that helps to pay for airfare for those seeking treatment for addiction. And in that quest, she’s met some young people who’ve touched her heart, given her hope, and loved her unconditionally.

This is the story of one young man, Nick McErlean, 28, of Sag Harbor, who boarded a flight to recovery with Farrell’s help. A story of love, and faith, and the bond that can flourish between two people who’ve not even yet met — a bond so strong that McErlean calls her “Mama”. It’s a story about recovery and finding light at the end of a tunnel so dark it seems impossible that any hope can ever rise from the proverbial ashes.

This is their story.

A MOTHER TURNS TRAGEDY TO HOPE

Five years ago, on that day that changed her world forever, Farrell went about her normal routine, not worrying when she saw the car belonging to her son still parked in the driveway. She just thought her son might have overslept or gotten a ride to work with a friend.

But what Farrell and her daughter Breanna found was a nightmare beyond what any family should have to endure: Her daughter was able to circumvent the locked door they found to Kevin’s room — and found him dead of a heroin overdose.

“She told me, “He’s not breathing”. I could tell he’d been dead for awhile,” Farrell said, her voice breaking. “My daughter was on the phone with 911, but I told her it wasn’t going to help. He was gone. The only solace I found was in his face. He looked like he was asleep. He just looked at such peace. I knew that his struggle was finally over.”

Her son Kevin, who had been playing football since he was eight as a quarterback, was injured during a game, he needed surgery and was prescribed Vicodin, she said. “That’s where the addiction began.”

And in the years since her son’s death, Farrell found comfort in creating “On Kevin’s Wings — Hope Takes Flight“, a not-for-profit that raises funds to help provide airfare and a means for those struggling with addiction to find help.

She says since her son’s death, she sees no sign of the rampant drug scourge slowing down on Long Island and across the United States. “I only see it getting worse. It’s terrible. I sent my first 17-year-old to treatment in Louisiana recently,’ she said. “It scares me if we’re sending 17-year-old kids to rehab.”

What makes the crisis even more troublesome is that the deadly drugs are now synthetic and are lethal, with much higher doses of Narcan needed to revive a person who’s overdosed from heroin or fentanyl, and those killer drugs being laced into marijuana and cocaine to keep users powerfully addicted.

She is outraged by the recent heroin ring bust along Route 110 in Suffolk County and said, unlike in some cases, where dealers are just addicts themselves struggling, those arrested in the recent takedown had lavish cars and seemed to be “in it for the money.”

FARRELL FEARS THE ESCALATING HEROIN EPIDEMIC COULD SIGNAL THE DEATH OF A GENERATION.

First responders have told her that they have been called to the same home multiple times, reviving a person again and again.

And hope is what Farrell tries to imbue, through her work on the advisory board of Families in Support of Treatment, or FIST, with executive director Anthony Rizzuto — FIST, along with the Long Island Recovery Association and Long Island Council on Alcoholism and Drug Dependence were awarded state funding to open a recovery center, the THRIVE Long Island Recovery Center, located at 1324 Motor Parkway in Hauppauge.

Speaking of her own foundation, North Shore Drug Awareness, Farrell said she knew she wanted to do something in her son’s name. After founding “On Kevin’s Wings — Hope Takes Flight,” she hosted her first fundraiser in January, and in just over two months, she’s raised enough for airfare or bus fare to send 20 people for treatment so far.

Farrell said she thought of the idea to provide financial support for transportation after her daughter, who also struggled with addiction, came home from a program in Florida. She came back home after 45 days, although that’s not recommended, Farrell said. “A few weeks after she came home she went back to using. She totaled her car. She just decided for herself that she did not want this life anymore, so she told me, ‘I’m going back to Florida. You have to bring me to the airport.’ Thank God I had the means to buy a plane ticket. But so many people don’t.”

And with that, a dream was born.

Southwest has donated eight flights to Farrell’s foundation and she’s put out an appeal to other airlines including Delta and Jet Blue.

“THE REST OF THE AIRFARE IS PAID FOR THROUGH FUNDRAISING”, FARRELL SAID.

And the miracles of recovery have already begun.

McErlean was the very first young person Farrell’s foundation helped to send to treatment in Florida.

In Florida, he was sent to a sober house, where life turned around, hope was ignited, and the two forged a lifetime bond.

“He literally calls me every day or we speak on Facebook,” Farrell said. “I’m so grateful. He’s amazing.”

Farrell said she believes her son “has a hand” in guiding her toward those she’s meant to help. “I think Kevin has something to do with it,” she said.

Another young man, also named Nick, from Ohio — Farrell’s organization helps individuals from across the country — had been sleeping in the doorway of a business. “He said, ‘If I don’t leave here, I’m going to die.'”

And so, she helped to facilitate a scholarship for a treatment facility in Florida, got him on a plane, and, along with others, helped buy him new clothes and sneakers. “He told me all he had was a small garbage bag with his belongings,” Farrell said.

In that nurturing, Farrell’s maternal side shines. “You can’t help but become attached,” she said.

And in that caring for other young people, helping to find the elusive light, she’s found healing.

So much so that on Mother’s Day, Farrell will travel to Florida, “to be with my two Nicks.” She said while most of those she helps, she rarely speaks with, there are some, such as McErlean, who touch her heart.

“I don’t know what the connection is, but I’m glad it’s there,” she said.

By Lisa Finn via Patch