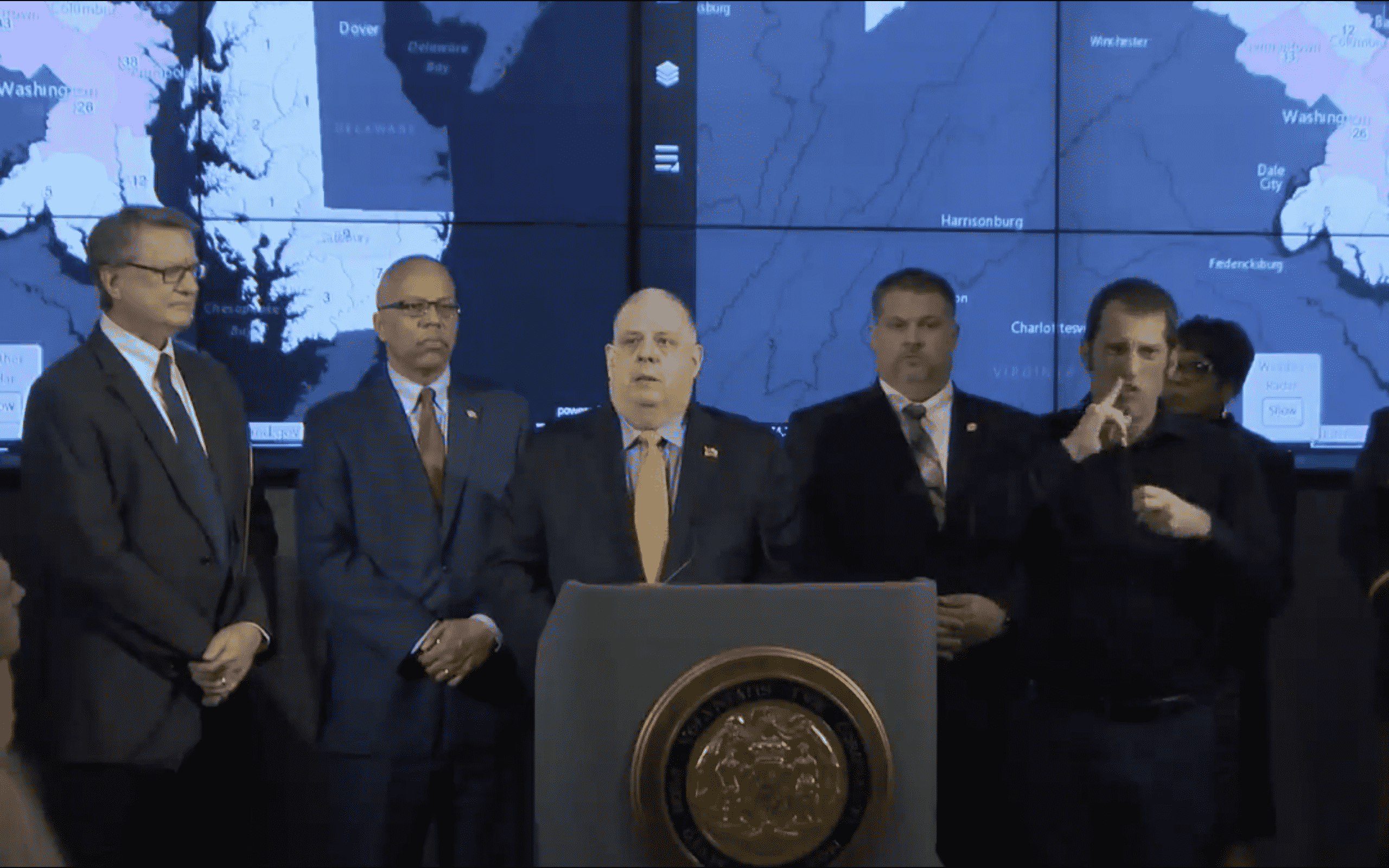 At a news conference on March 1, Maryland Gov. Larry Hogan (R) said he will sign an executive order to declare the state’s opioid crisis a “state of emergency,” a legal step that will allow state agencies to better coordinate their response to the growing opioid addiction crisis. (Facebook/larryhoganmd)

REISTERSTOWN, Md. — Maryland Gov. Larry Hogan on Wednesday escalated his administration’s response to the opioid-addiction crisis, declaring a state of emergency and committing an additional $50 million over the next five years to beef up enforcement, prevention and treatment services.

Hogan (R) signed an executive order calling for the state of emergency, an instrument many jurisdictions use to coordinate anti-opioid and heroin strategies. The action fulfills a campaign promise he made in 2014 but temporarily shelved after taking office in favor of other legislative and executive initiatives.

The governor, who lost a cousin to addiction years ago, said the declaration underscores what he described as “an all-hands-on-deck approach” to growing rates of heroin, opioid and fentanyl use.

“The reality is that this threat is rapidly escalating,” Hogan said, appearing with Lt. Gov. Boyd Rutherford (R) and a large contingent of state officials at the command center of the Maryland Emergency Management Agency outside Baltimore.

Heroin and fentanyl, a powerful synthetic opioid, killed 1,468 Maryland residents in the first nine months of 2016, up 62 percent from the same period in 2015, according to state data. Many of those who overdosed initially abused prescription painkillers and other opioids. The trends are part of a nationwide opioid epidemic.

State officials acknowledged that the emergency declared Wednesday bears little resemblance to the kinds of mobilizations that are typical after severe weather emergencies or extreme civil unrest and that usually involve curfews and travel restrictions.

They said the death toll from opioids justifies use of the state emergency management agency to break down bureaucratic silos separating bureaucracies and local and state officials.

“It gives us the ability to leverage the resources that are available,” said Clay Stamp, Hogan’s senior emergency management adviser, who will lead the statewide effort.

He and others could offer few specifics. Stamp, a former director of the state emergency management agency and the Talbot County Department of Emergency Services, agreed that details were “squishy” at this point. He also said he had been tasked with the job the day before Hogan’s announcement.

At the same time, Stamp said, his experience would help him coordinate law enforcement, social services and public health providers. He said “clear, specific goals” would be announced soon.

Opioid abuse has been a signature issue for Hogan. Shortly after taking office, he formed a task force headed by Rutherford that has made nearly three dozen recommendations on drug policy. The governor has proposed bills that include measures to limit prescriptions of opioid-based painkillers and to increase prison sentences for dealers.

Hogan said he would submit a supplemental budget request to lawmakers for the five-year, $50 million expenditure. He did not say where the money would come from.

Although some parent activists and other advocacy groups have applauded Hogan’s efforts, others say he should do more — including devote more resources and attention to long-term residential treatment.

“We don’t need education, and we don’t need more law enforcement,” Mike Gimbel, a former Baltimore County drug czar and a recovering heroin addict, said in a statement on Wednesday. “We need treatment on demand. Ten million new dollars is a drop in the bucket.”

Carin Miller, president and co-founder of Maryland Heroin Awareness Advocates, saluted Hogan for the high profile he has given the crisis, saying the governor has “been wonderful since he got into office.”

But Miller, whose grass-roots organization works to draw attention to opioid abuse and place addicts in treatment, echoed Gimbel’s call for increased focus on detox, medical and counseling programs. “When people reach out to us, we are beside ourselves,” she said. “Nine of 10 times, we are sending them to Florida or other states for treatment.”

Hogan said at the announcement Wednesday morning that the state cannot shoulder the entire burden by itself and that federal and local governments, along with the nonprofit sector, have to step up.

One idea the governor categorically rejected: a proposal by Del. Dan K. Morhaim (D-Baltimore County) to create “safe” sites for heroin users, where trained professionals could protect them from overdose and unsanitary needles.

Morhaim, a physician, calls the idea part of a “harm-reduction strategy.” He proposed legislation to make it happen last year and has introduced a similar bill this year.

“I think it’s absolutely insane. . . . Maybe he wants to get a license to sell heroin,” Hogan said, referring to the lawmaker’s role as a consultant to a prospective medical marijuana dispensary and his advocacy of laws that allow medical cannabis.

In an email Wednesday afternoon, Morhaim demanded an apology from Hogan and reiterated past statements that he had not violated any rules in working to launch Maryland’s medical cannabis program.

“Governor Hogan’s statements are patently false, and he knows it,” Morhaim said. “I strictly complied with the ethics laws.”

Bill Turque, who covers Montgomery County government and politics, has spent more than thirty years as a reporter and editor for The Washington Post, Newsweek, the Dallas Times Herald and The Kansas City Star.