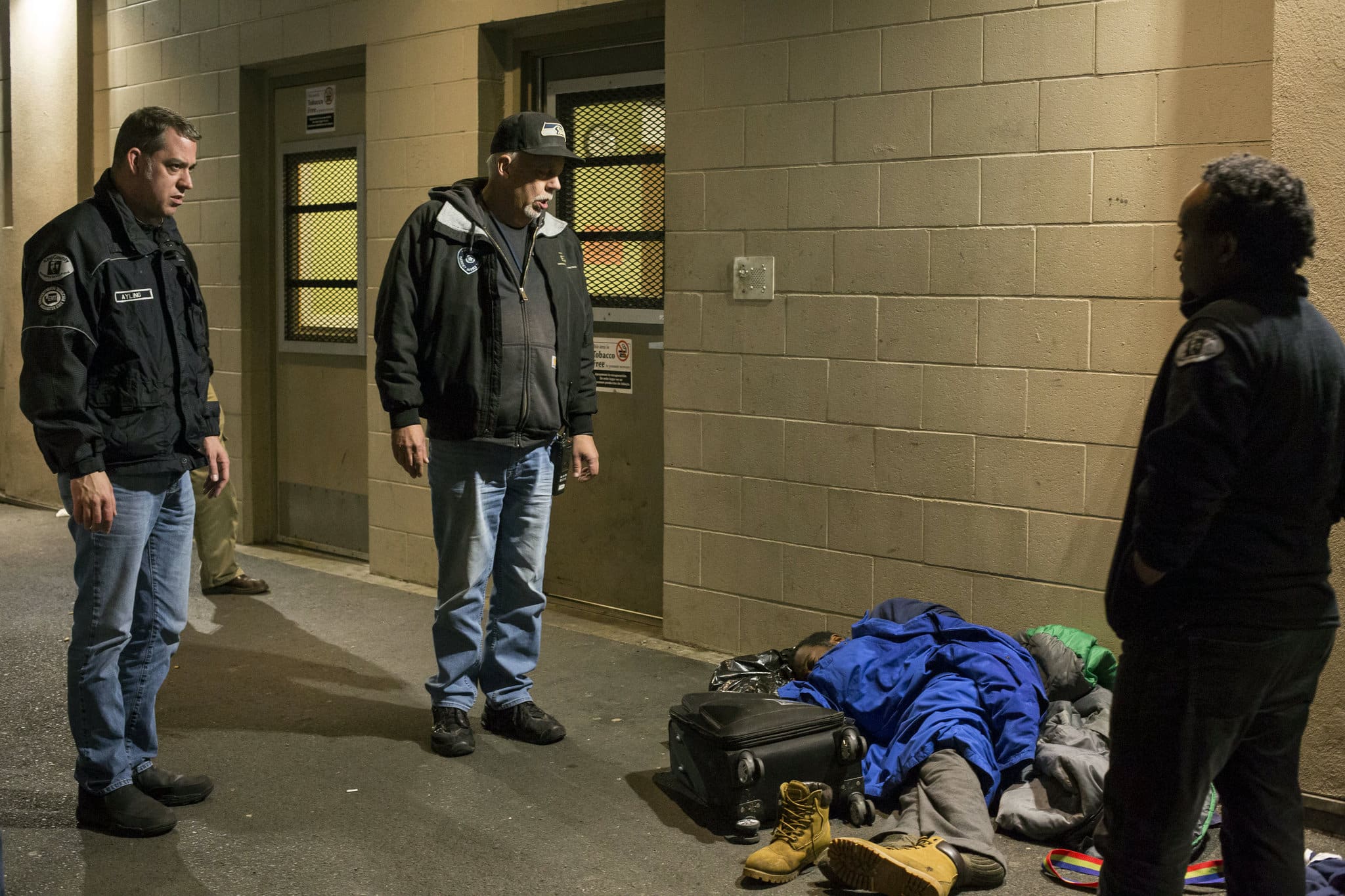 Members of the King County’s Emergency Service Patrol, from left, Todd Ayling, Dan Manus and Soloman Tesfay, prepare to help an intoxicated man in Seattle. Mr. Manus, a former addict himself, says, “It just seems today that there’s so much more out there, so many more people.” Credit David Ryder for The New York Times

‘FOR THE GRACE OF GOD, THERE GO I’

The girl looked to be barely out of her teens, and was teetering on the brink of consciousness.

“She couldn’t even form a sentence,” said Dan Manus, a soft-spoken 61-year-old in a Seattle Seahawks cap. His jaw tightened as he recalled the night in October when he and his partner on the King County Emergency Service Patrol found the girl and, he thinks, saved her life.

A former addict, he knows the terrain too well. He’s been clean for 22 years now, and working for the county in Washington state for the last nine.

“I can relate to everybody I work with down there, because for the grace of God, there go I,” Mr. Manus said, standing in the patrol parking lot between runs. “So, yeah, I feel like this kind of was my calling.”

The Emergency Service Patrol was established in the 1980s by a private charity (later taken over by King County) to rescue street alcoholics by bringing them to a safe “sobering center” to sleep it off.

In October, though, in an acknowledgment of heroin’s new ravages — treatment admissions for heroin in King County, Washington surpassed alcohol for the first time in 2015 — Mr. Manus and other patrol crew members were trained and equipped with naloxone.

“Harm reduction” is an approach that was to some degree pioneered here. One of the nation’s first clean-needle exchanges started in nearby Tacoma in 1988.

King County is now considering opening what could be the country’s first safe-injection site. There, addicts could use drugs under supervision by a health worker who may, crucially, also open the door to recovery programs, all under one roof.

For Mr. Manus, the crisis is personal. In 1992, he was saved from death by someone who found him in mid-overdose and called paramedics.

Seattle was a different, harder-edged city back then. Grunge music, and the heroin that swirled like a slipstream through the lives and song lyrics of some of its stars, was spilling out of the clubs.

The mix of drugs was changing, too. Heroin’s impact in King County surged in the late 1990s in the number of times it was identified in connection with a drug death, before beginning a near decade-long slide — a period that coincided with an increase in the number of times prescription opioids were found in victims’ bodies, which peaked in 2009. In that same year, heroin’s role began rising again to hit its highest-ever, worst numbers in 2014 with a drop since then, according to county figures.

More people lately seem to be on complex combinations of drugs, Mr. Manus said — like the girl who, at his direction, was treated by paramedics.

“It just seems today that there’s so much more out there, so many more people,” Mr. Manus said quietly. “It feels nonstop.”

By Kirk Johnson via The New York Times