Let's Go for a Win on Opioids 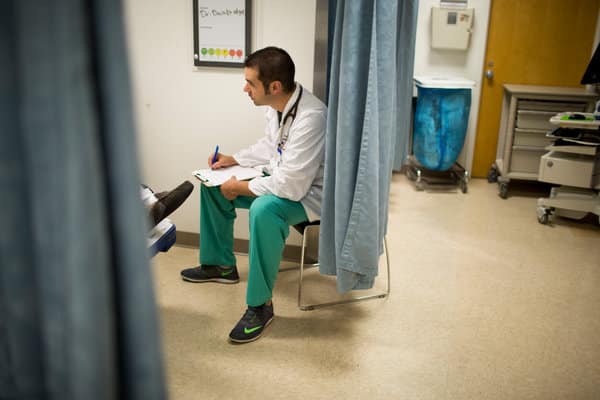 The health care bill failed. The odds of successful tax reform are remote, and in any case, an actual proposal is months away. If we lived in a normal country, our president would use the current moment to try to get a win - to try to pass something that would help people, demonstrate that Washington can function and rebuild his brand.

If we lived in a normal country, the Trump White House would launch a major initiative to combat opiate addiction. There are roughly two and a half million Americans addicted to opioids. Between 1999 and 2015, the number of those who died rose from 8,200 annually to 33,000. That means that over two years more Americans died of opiate addiction than died in the entire Vietnam War.

As Christopher Caldwell pointed out in a powerful essay called "American Carnage" in First Things, the opioid crisis is killing at a higher rate than crack or any other recent plague. At the peak of the crack epidemic there were about two deaths per 100,000 Americans. Today, the opioid epidemic is killing 10.3 per 100,000.

The national spotlight has been put on this crisis, but the situation is getting worse, not better. The Washington Post reported that in Stark County, Ohio, for example, the number of opioid-related deaths has increased by 20 percent in the past year. The county just asked the state to send over a cold storage trailer because the morgue is already full.

And the crisis is hitting exactly in those places where Trump voters live, especially struggling rural areas in Appalachia, the Upper Midwest, and the working-class areas of New England. That's why Trump was so vocal about it during the campaign. He promised he would give every sufferer "access to the care and the help that he or she needs." He told one Ohio town hall, "We're going to spend the money, we're going to get that habit broken."

It's a challenging problem. In 12 states there are more opioid prescriptions than people. According to the Centers for Disease Control and Prevention, those who are addicted to prescription painkillers are 40 times more likely to be addicted to heroin.

As Caldwell writes: "If you take too much heroin, your breathing slows until you die. Unfortunately, the drug sets an addictive trap that is sinister and subtle. It provides a euphoria - a feeling of contentment, simplification and release - which users swear has no equal. Users quickly develop a tolerance. The dosage required to attain the feeling the user originally experienced rises until it is higher than the dosage that will kill him.

The most dangerous day for an addict is the day he's released from some sort of custody. On this day the dosage that he handled comfortably two weeks before could cause his death.

To its credit, the Trump administration has launched a commission to see how the federal government can tackle this crisis. Trump already appears to support the Obama administration spending levels on opioid addiction. But Trump could propose legislation fully funding the Comprehensive Addiction and Recovery Act. When that was passed, by overwhelming bipartisan majorities in 2016, the price tag was put at $1 billion. But only a portion of that has actually been appropriated.

Special focus could be put on adding treatment centers. According to a 2014 federal study, about 90 percent of those who met the criteria for a drug abuse disorder didn't get treatment. Some live in counties where there are zero facilities.

Something like half of all sufferers drop out of treatment within a few months, so it might be worth thinking about involuntary commitment too. Sally Satel has been treating people addicted to heroin for a quarter century and writes for The Wall Street Journal:

"I speak from long experience when I say that few heavy users can simply take a medication and embark on a path to recovery. It often requires a healthy dose of benign paternalism and, in some cases, involuntary care through civil commitment. Many families see such legal action as the only way to interrupt the self-destructive cycle in which their loved ones are caught."

This isn't just about painkillers run amok. Instant and slow-motion suicide by alcohol and a range of other drugs are rising at the same time. And these addictions and deaths are happening in the most socially and economically barren parts of the country.

An anti-opioid effort won't be effective unless it's part of a broader effort at social and economic reweaving, a set of efforts to either help people move out of rural, blighted communities or to find jobs and social networks while there.

Trump could talk about many other approaches - medical marijuana as a substitute for pain relief, holding pharmaceutical companies more accountable - but ultimately this is a disease that grows in despair.

Trump was elected out of that despair, and a big anti-opioid push would be a first and politically viable step toward attacking it.

By David Brooks via The New York Times