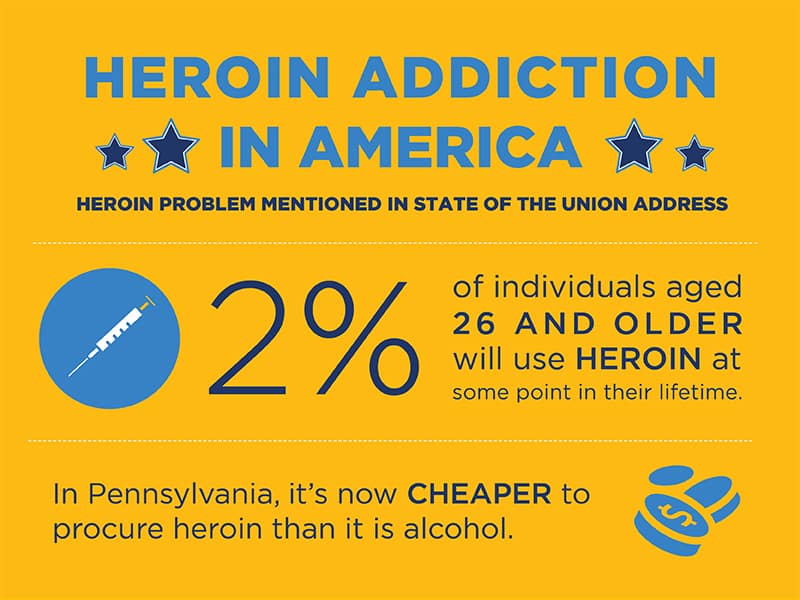 A recent finding from the National Survey on Drug Use and Health has shown that 2% of individuals aged 26 and older will use heroin at some point in their lifetime. Especially in places such as the Twin Cities, heroin addiction in America has risen to new heights. The heroin epidemic has gotten particularly nasty in the state of Pennsylvania, where it is now cheaper to procure heroin than it is alcohol. In an effort to fight back against this growing trend, heroin addiction treatment centers all over the country have developed special programs for heroin abuse.

Just How Bad Has Heroin Addiction In America Gotten?

President Obama referenced the opioid crisis in America during his State of The Union Address in January, 2016. Unfortunately, the president remarked that because of the election year, expectations for what can be done are low. In continuation of the president's desire to address the heroin problem in America, he named a Cabinet-level point person to address the problem of opiate use in rural communities. Agriculture Secretary Tom Vilsack will be spearheading an effort that aims to probe into issues facing small towns in America. It will be a difficult task indeed. Heroin use has skyrocketed in rural parts of the United States in recent years because it's often the cheapest substance to obtain.

How Do Treatment Centers Help Fight Heroin Addiction In America?

Addiction treatment centers offer individuals struggling with heroin addiction a safe space to detox and withdraw from opiates. Opiate addiction is often coupled with a physical dependence that can be extremely difficult to defeat alone. Part of the withdrawal process often includes bouts of intense, drug-seeking behavior which can quickly overpower an individual who is without professional supervision nearby to prevent relapse. Many treatment centers also offer specialized programs designed specifically for combating opiate abuse to help others gain freedom from addiction. These programs often include evidence-based recovery methods such as peer group therapy or behavior modification exercises.

What Else Should I Know About Heroin Addiction In America

Everyone has a part they can play in working to reduce the rates of heroin addiction in America. If you know someone who is struggling with heroin abuse, assisting them in pursuing a professional addiction treatment program is a small way to make a big change on the current statistics. Together, we can work to remove the stigma surrounding addiction. By speaking up about addiction in our community, we can all work toward fighting against the heroin epidemic that has taken hold of the United States. Reach out to us today to see how you can help yourself or those around you gain freedom from addiction.