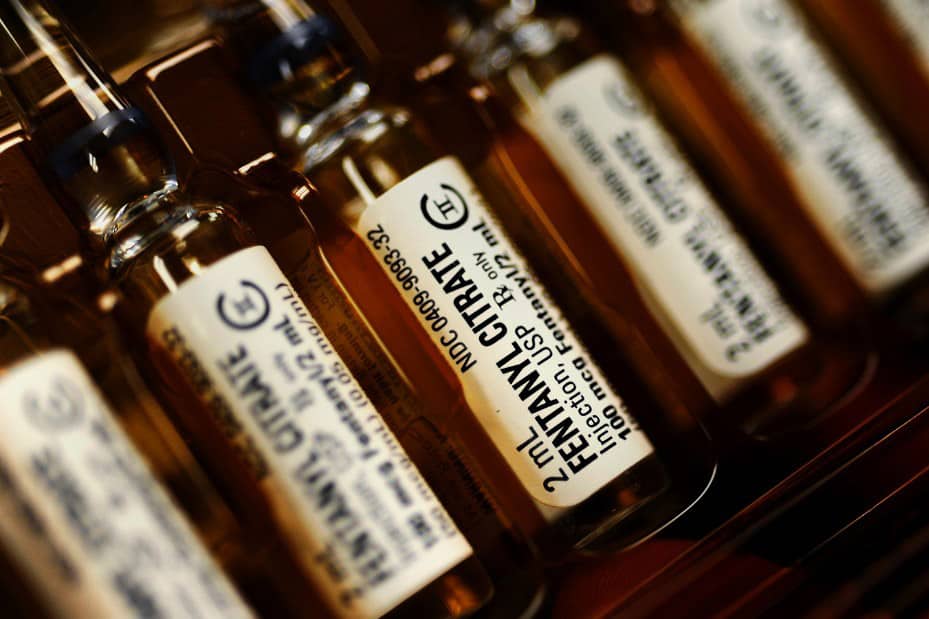 A billboard on a main highway tallies the number of residents in this mostly rural county who have overdosed on prescription painkillers, heroin and other illicit opioids this year: 96 overdoses, 15 of them fatal. What the sign doesn't say is that a large and growing number of those deaths are the result of fentanyl, a fast-acting drug that is 50 times stronger than heroin and can kill users within seconds. Cheap and easy to produce, it is used by drug dealers to intensify the effects of heroin and other illicit drugs, often without the users' knowledge. The presence of fentanyl in the illicit drug supply has put law enforcement officials and the medical community on high alert in more than a dozen states, accelerating the battle against opioids on all fronts. States, counties and cities are responding to this latest crisis by doing more of what they already were doing: stockpiling the overdose reversal drug naloxone, funding more drug treatment, and ramping up police surveillance of drug trafficking. In addition, a handful of states are stiffening penalties for selling the lethal drug. But even in hard hit states that have been battling fentanyl for more than three years, the death toll continues to spike. Connecticut, Illinois, Maine, Massachusetts, New Hampshire, New York, Ohio, Tennessee, West Virginia and Rhode Island were among the states hit hard by fentanyl as early as 2013. In 2014, the powerful drug killed more than 5,000 Americans, according to the Centers for Disease Control and Prevention. The next year, nearly 10,000 Americans died of fentanyl-related overdoses. All opioids, including heroin and prescription painkillers, killed more than 33,000 people in 2015, the most recent year for which numbers are available. Early death reports from states indicate that national data, to be released in January, will show an even steeper rise in deaths in 2016, said Matthew Gladden, an opioid investigator at the CDC. This year and last, the deadly drug began spreading to more states. "We no longer have a situation of isolated outbreaks, but a major sustained public health challenge with the supply of fentanyl," he said. The sharpest spike is in Maryland, according to Gladden. "The trends there are extremely disturbing. Other emerging hotspots include Florida, New York City and Virginia," he said.

Public health messages like the billboard in Frederick, as well as radio and TV alerts, are increasingly common. And standardized approaches to detecting the presence of the deadly drug and communicating its dangers - to drug users, people in treatment or recently released from prison or jail, and their friends, family and advocates - also are beginning to emerge. In Maryland, the state health department in April issued an alert about carfentanil, a related drug that is even more potent than fentanyl and is used as a tranquilizer for elephants and other large animals. The warning to community advocates across the state came after one person in Frederick County and two in Anne Arundel County died of overdoses involving the drug. Maryland and other states also are developing policies for detecting the deadly drug as quickly as possible and targeting public health messages to affected communities. In Massachusetts, for example, the health department in January asked all hospitals and treatment centers to routinely screen for fentanyl in patients who have overdosed or are seeking treatment for addiction. Medical examiners there and in Maryland are also attempting to shorten the weeklong process of reporting the results of toxicology tests performed on people who have died of drug overdoses. And in Maryland, Massachusetts, New York and Rhode Island, law enforcement and public health officials are sharing their data to keep better track of which drugs are killing people and where. "What's so concerning is that in Massachusetts, where, probably more than any other state, we've implemented all of the recommended strategies to address the opioid epidemic, overdose deaths are still surging, largely driven by fentanyl," said Dr. Alex Walley, director of an addiction medicine fellowship at Boston Medical Center. In general, the U.S. Department of Health and Human Services has recommended that states take three major steps to stem opioid overdose deaths: reduce unsafe prescribing of prescription painkillers, widely distribute the overdose rescue drug naloxone, and provide greater access to opioid addiction treatment using medications approved by the U.S. Food and Drug Administration.

With the advent of fentanyl and other highly potent synthetic drugs, many states are amplifying those policies and adding new programs to protect drug users from deadly contaminants in heroin, cocaine and other illicit drugs. Most important, Walley said, is to make sure that people don't use these drugs while they're alone. Because fentanyl works much faster than heroin, the window of time to save a person who has overdosed on the drug is only a few minutes, compared to an hour or more with heroin. In most cases, unless a person with the rescue drug naloxone is in the same room as the drug user, rescue is not possible, he said. In Frederick, Maj. Tim Clarke of the County Sheriff's Office said officers routinely find fentanyl overdose victims who still have the syringe in their arm because they passed out before they had time to remove it. An informal survey of drug users by the Massachusetts Department of Public Health revealed the same thing. This is how one Massachusetts drug user who witnessed a fentanyl overdose described it: "A person overdosing on regular dope leans back and drops and then suddenly stops talking in the middle of a conversation and you look over and realize that they're overdosing. Not like with fentanyl. I would say you notice it as soon as they are done. They don't even have time to pull the needle out and they're on the ground." Another difference between heroin and fentanyl and related drugs such as carfentanil is that overdose victims usually require multiple doses of naloxone to be revived. That means rescue workers and bystanders need to have at least two doses of the rescue drug on hand and call 911 immediately, even if the victim appears to be revived. In Frederick, Clarke said, his department had just started talking about equipping officers with multiple doses of naloxone, although it's expensive and hard to buy in bulk because of its short shelf life. So far, however, he said rescuers have been able to use multiple doses when needed because two officers are assigned to each overdose call and each officer carries one dose. In addition, emergency medical service professionals usually arrive on the scene with one or more doses of the overdose antidote, and, in many cases, a bystander has already administered the lifesaving drug by the time officers arrive, he said.

As the number of overdose victims who visit hospital emergency departments skyrockets and overdose deaths mount, addiction experts are suggesting unusual initiatives to protect the lives of drug users. Last week, the Massachusetts Medical Society recommended that the state create a first-in-the-nation "safe injection" clinic where people can use drugs and be observed by medical professionals who can rescue them if they overdose. State Del. Dan Morhaim, a Democrat who represents Baltimore, this year proposed a bill that would create similar clinics in Maryland. Such sites have proven successful at reducing overdose deaths in other countries. But they run counter to federal drug laws, and are not expected to be widely used in the U.S. any time soon, although safe drug consumption sites are under discussion in Seattle and in several cities in New York, including Albany, Ithaca, New York City and Syracuse. In March, Maryland Republican Gov. Larry Hogan declared the opioid crisis a state of emergency with the goal of promoting communication among state agencies and between state and local officials. The state also dedicated another $50 million to fighting the epidemic. Clay Stamp, the head of the state's new Opioid Operational Command Center, said the battle against fentanyl and other opioids is challenging because overdose deaths are increasing at lightning speed while the coordination process takes time. "We're just now starting to mobilize," he said. In Maryland, there were fewer than 200 deaths related to fentanyl in the first nine months of 2015. But in the same period of 2016, fentanyl-related deaths had nearly quadrupled, to 738, accounting for more than half of overdose fatalities in the state, 1,468, according to the Maryland Department of Health and Mental Hygiene. In Frederick County, only two overdose deaths were attributed to fentanyl in the first nine months of 2015. A year later, 28 people had died of a fentanyl overdose in the same time period. For Stamp, the goal is simple: reduce the number of fatalities. To do that, he said, his team will start by expediting an opioid prevention, treatment and law enforcement plan released by Hogan and Lt. Gov. Boyd Rutherford in January. Stamp said his team also will work to spread innovative programs across the state. One such program, Safe Stations, is in Anne Arundel County, home to Maryland's state Capitol. Started in April, it allows anyone with an addiction to walk into a local fire station and get a medical assessment and help finding treatment. Any drug-related legal issues they may have will be suspended while they seek treatment. In Frederick County, a successful but underfunded program connects health care professionals who are recovering from an addiction "peers" with people who have overdosed. "The dream is to expand that program with more funding so that a peer can meet every person face-to-face in that moment right after an overdose," said Andrea Walker, county director of behavioral health services. "If death were a deterrent to drug use, we wouldn't be in this situation," she said. But that's not the way addiction works. The disease reprograms the brain to seek more drugs, even in the face of death, she said.

By: Christine Vestal via Governing.com