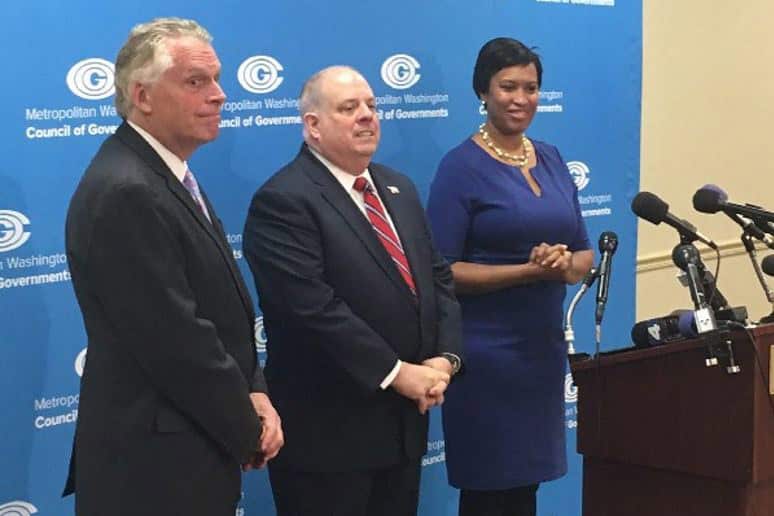 LINTHICUM HEIGHTS, Maryland - Gov. Larry Hogan joined the governor of Virginia and the mayor of Washington, D.C., for a summit targeting the misuse of heroin and opioids. The heroin and opioid crisis doesn't have any borders or boundaries, which is why people from the three jurisdictions are coming together to fight the problem on a regional level. Hundreds of people from Maryland, Virginia and D.C. involved in the fight against heroin and opioid misuse packed the auditorium at the Maritime Institute. Thousands die from overdoses in the region every year. "We're not stopping it. We're all trying these different things and yet it's going up in every jurisdiction, but you can't just give up and say, 'Let's just let the death rates escalate,'" Hogan said. So they're combining resources and sharing ideas, policies and data, trying to find a solution to help stop the epidemic. One idea Maryland is looking at borrowing from Virginia is expanding drug courts to keep misusers out of the traditional justice system and get them the help they need for recovery. "We have some drug courts in Maryland, but I believe Gov. (Terry) McAuliffe was talking about their effectiveness in Virginia, and that's one thing we'd try to expand, the drug courts in Maryland. We don't have them throughout every one of our jurisdictions. They've worked well for us, but I think we could use more," Hogan said. McAuliffe believes the problem starts with the doctors prescribing opioids. Eventually, the goal is for Virginia, Maryland, and D.C. to have prescription monitoring databases and link them to track who is getting, and writing, prescriptions across state lines. "Because a lot of people live in Virginia and work in D.C., and vice versa, they're visiting doctors back and forth. Same with Maryland. We need to know when folks are doctor-shopping. That is how we're going to hit this problem. We need to have knowledge, and then we need to hold doctors accountable," McAuliffe said. They all agree this epidemic needs to be treated as the health emergency that it is. "Part of that is destigmatizing the need for people to seek treatment, and we all have a role to play in that," D.C. Mayor Muriel Bowser said. Officials said the collaboration doesn't end. It is really just the beginning of these three jurisdictions working together to help lower the numbers of heroin and opioid misuse.

By Kim Dacey via WBALTV